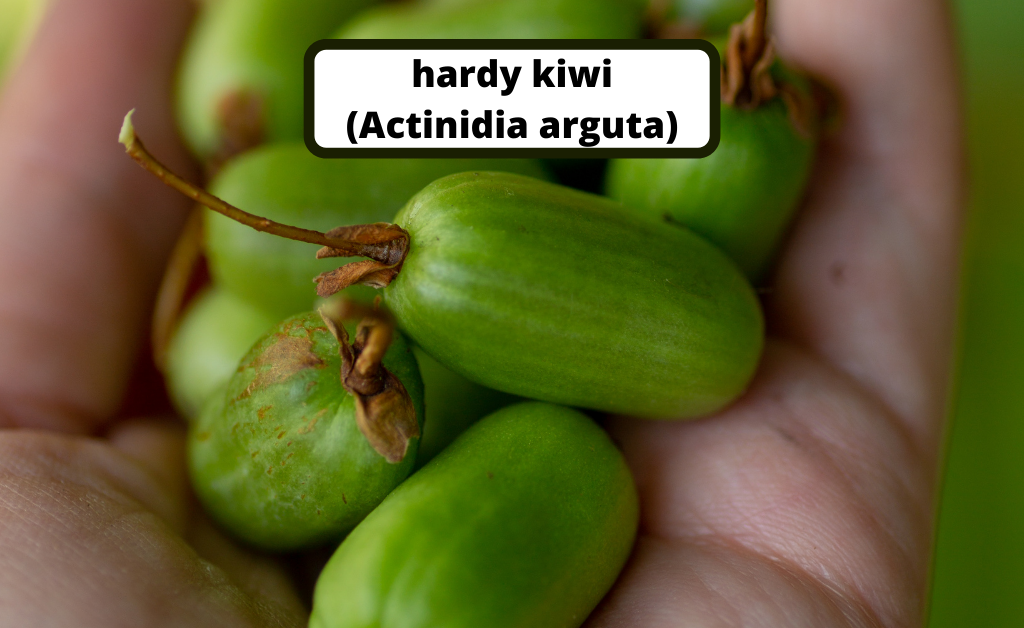 I can’t be the only one that presumed that Kiwi plants originate from New Zealand and that there was no way this could ever grow in colder areas, like the place where I live; Norway. I was really happy when I found out that I most likely can plant this perennial vine where I live (zone 7) as the hardy kiwi (Actinidia arguta) is native to Japan, Korea, Northern China, and the Russian Far East and can, if the temperature doesn’t drop too quickly, survive temperatures down to -34 °C (-30 °F). The small fruits of the hardy kiwi can be eaten whole as they are not covered with the fuzzy hair most other species of the genus have.

Hardy kiwi is also known as:

I have bought some seeds and managed to get a few plants (I estimate around 20%) to sprout, but those that managed to live seem to be a very slow growers. After around 4 months the plants are not taller than the width of my hand.

My wife discovered hardy kiwis in our local grocery store. We have never seen them before, which isn’t strange as they are best to be eaten as soon as they are ripe, unlike the fuzzy kiwifruit (Actinidia deliciosa).
The hardy kiwis my wife found really showed they were a bit overripe, but they were quite good to eat and I took seeds from 2 of the small hairless fruits.

I washed and rubbed the seeds so they would be as clean as possible to prevent any fungus or rot when I put them in some soil. I estimate I got an almost 50% success rate from these seeds and they had the most incredible growth.
I had to prune them back time after time so they would not take over the whole of our rooms.

Hardy Kiwis can be propagated with ease from established plants

My wife suggest that I put some of the vines I pruned off the hardy kiwis in a glass of water. “You never know…” she said. And boy did I not know at all. I have never seen such success with fresh, thin cuttings before.

If these vines can cope with our climate then I must be very careful of where I place them and prune them back or I risk them completely strangling everything else that grows.

The next step after I have transplanted them into the ground is to identify males from females so I can focus on getting them distributed for later production. I aim to have one male plant for five to six female plants.

I will update this as things progress.
As of the 3rd of May 2021, none of them have been transplanted yet.

Found a self-pollinating named cultivar in a nursery

Recently visited a nursery and they had a self-pollinating cultivar named “Issai”.
I bought one and transplanted it fairly in the middle of where I plan to transplant the rest of the kiwis that I soon will transplant. As I presume it can pollinate some of my other female hardy kiwis.
The Issai kiwi is just next to a raised hugelkultur bed, which I hope will provide it will nutrients and make sure that the kiwi will not dry out. The area around the kiwi is filled with woodchips.