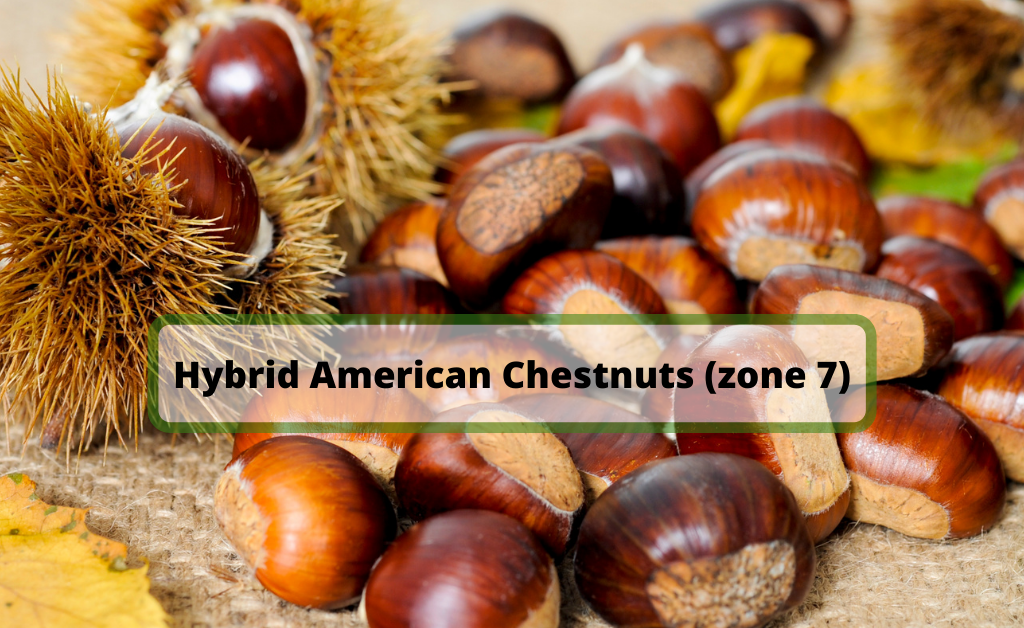 In Norway, where I live, one will not find edible chestnuts in the wild, they have not been naturalized … yet.
I was doing some research into what trees I could plant in our garden that were uncommon and several mentions of the American Chestnut Blight crossed my paths. This caught my attention for several reasons, apart from the fact that I presumed I could manage to grow them here and I wouldn’t mind another source of food on our property that is naturally gluten-free and I’d really like to have some trees that can give me shade on our property in the summer time.

There are four main species of chestnut tree:

Chestnuts have a taproot, which is a deep, central root that grows straight down from the base of the tree. The taproot is the main anchor for the tree and helps to secure it in the ground. In general, chestnuts have a strong and deep root system that is well-suited to growing in a variety of soil types.

If the soil is well-draining and not too heavy or clay-like, the taproot of a chestnut tree can grow deep into the ground, providing a solid foundation for the tree. This can be especially important in areas where the soil is prone to erosion or where the trees are exposed to strong winds, as the deep roots can help to anchor the tree and prevent it from being toppled over.

However, if the soil is too heavy or compacted, or if there are obstacles such as rocks or other debris in the ground, the taproot of a chestnut tree may be unable to grow deep into the soil. In these cases, the tree may be more prone to being blown over or becoming unstable. It is important to consider the soil and any potential obstacles when planting chestnuts to ensure that the trees have the best chance of thriving.

Planting and Spacing Chestnuts for Optimal Pollination and Growth

While it is generally recommended to plant chestnuts at least 35 to 40 feet (10 to 12 meters) apart to allow enough space for the trees to grow and spread their roots without competing for nutrients and water, it is possible to plant them closer together if necessary. I personally have planted them much closer to each other as I’ve planted a couple of them for shade in the summer when they grow tall enough.
If you have already planted your chestnuts and they are closer together than recommended (as I have), you may need to prune them in the future to control their size and shape. Pruning is a common practice that is used to maintain the health and vigor of trees and can help to prevent problems such as overcrowding and disease.

If you do decide to prune your chestnuts, it is important to follow proper pruning techniques to avoid damaging the trees. This may involve removing dead or diseased branches, thinning the canopy to allow more light and air to reach the interior of the tree, and shaping the tree to improve its form and structure. With proper care and attention, your chestnuts should continue to thrive and provide you with a bountiful crop of fruit for years to come.

Chestnuts can grow to be quite tall, with some varieties reaching up to 100 feet (30m) in height. However, most chestnuts grown in gardens or orchards are smaller, typically reaching heights of 30 to 50 feet (9m to 15m). It is important to consider the eventual size of the tree when selecting a location to plant it, as you will want to make sure it has plenty of room to grow without causing any problems.

What about Pollination and Fruit Production?

Chestnuts are a type of tree that produces both male and female flowers on the same tree. While chestnuts are self-fertile, meaning that a single tree is capable of producing fruit on its own, they usually require cross-pollination for optimal fruit production. This is because the flowers of chestnut trees bloom in a way that makes them more receptive to pollen from other trees rather than their own. Pollination occurs when the pollen from the male flowers is carried by the wind and lands on the female flowers, fertilizing the ovules and leading to the development of seeds (chestnuts) and fruit. In order for pollination to be successful, the male flowers must be shedding pollen at the same time that the female flowers are receptive to it. (detailed explanation about the pollination here)

What benefits are there with Chestnuts regarding health and nutrition

The flour made from chestnuts is naturally gluten-free and for me, this is one of the biggest appeals.
Living in a temperate climate (USDA Zone 7) where we can’t grow any citrus fruits, having access to chestnuts would be very good as chestnuts actually contain a lot of Vitamin C (44%) of your daily intake of vitamin C (Source https://en.wikipedia.org/wiki/Chestnut)

So if I can get some of my chestnuts to thrive and produce nuts for me this would be something I’d really look forward to.

The very first nuts of Chestnuts I imported were from the Dunstan variants of Hybrid American Chestnuts, probably not true to type, but the nuts were from original Dunstan Chestnuts.

Those trees seem to be growing to be a wide canopy type of tree.

The second batch of American Hybrid Chestnuts I got was from a seller that said they were from trees that were quite old, that had no signs of Chestnut blight, and were thought to have been from an early attempt to produce hybrid Chinese/American Chestnuts.

Most of them grew really, really straight and long (almost 1 meter indoors before I took them outside).

A couple of them turned out to get a bushlike shape.
Those I’ve planted in a beech hedge behind our house. Very curious how they will turn out.

In addition to the different hybrid American Chestnuts, we have grown and planted some Dwarf Chestnut, American Chinquapin from seed and it looks like at least one of the two trees (bushes) has managed to survive the crucial first winter. I hope I will manage to get more seed nuts, but there are so few sellers online, probably because they germinate so quickly that their roots might develop too quickly so transport might be an issue. The ones I received had this issue and the seller said most of it must have happened during the shipment. If I can get my hand on more of them I will certainly order more.

The seemingly natural variant of chestnuts that I should have succeeded with would be the European Chestnut (also known as Sweet Chestnut, Spanish Chestnut, ). I have tried to germinate them 3 seasons, with nuts bought from several European sellers, but so far none of them have successfully germinated.

I will give it another go this winter, and if I don’t succeed in getting good, healthy nuts I will try to find someone that actually sells them as trees, but as far as I know, there is no one that has them near me.

Was looking on eBay if anyone had nuts for sale yet, and I came across a seller (link to their eBay account: https://ebay.us/ZJO4Fc) in Portugal that could ship sweet chestnut saplings. I was actually shocked how well they were shipped. If I ever start selling seedlings and saplings I will do the same.

One of my new sweet chestnuts I’ve transplanted, one I have put in a pot outside and one I have taken indoors as a backup. It has been a long, hard struggle to get this and I will not risk a very hard first winter to kill them all.