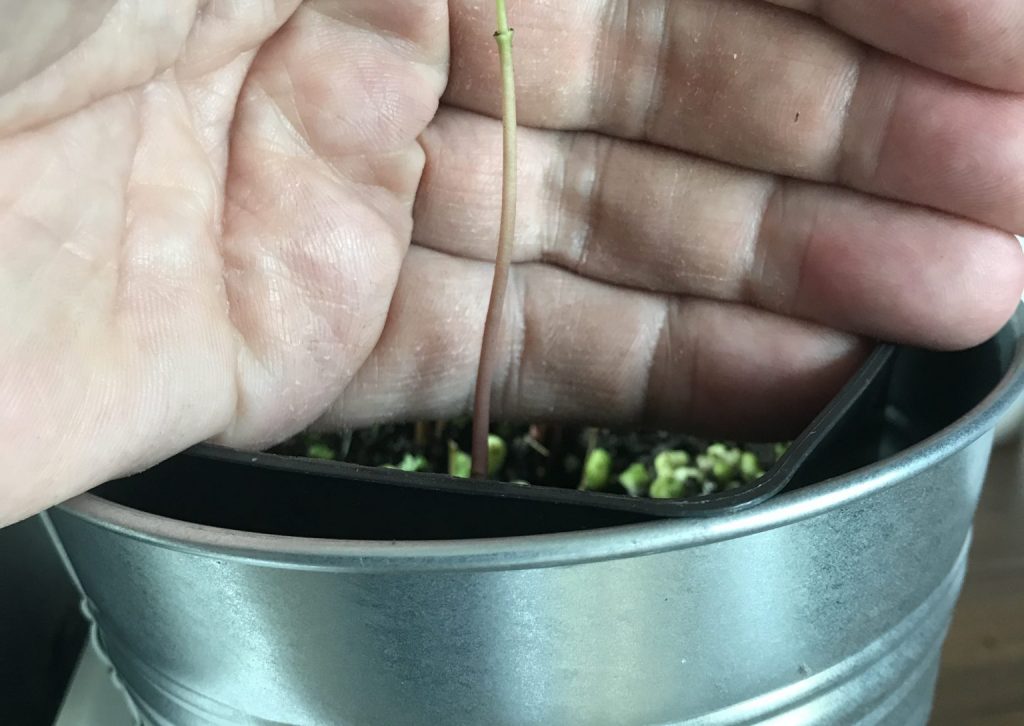 Towards the end of February 2020, I received 50 PawPaw (Asimina triloba) seeds from a seller off eBay. PlugsnPlants
I have found no local sellers or nurseries that had them.

The seeds came with very clear germination instructions, but since I got so many of them and they don’t store well I thought I’d change it up a bit. 1/3rd of them I put away for cold stratification as instructed.
This batch I took out after about a month and put them in a large zip lock bag, but these have not sprouted. I think they must have frozen in our fridge as it does that from time to time.

Next 1/3 I put outside, where it’s cold, but hopefully not freezing and they will follow the season.

The last 1/3 I tried to start off straight off. I presumed that the seeds had been stored in a cold environment already so there is a chance they will germinate as they are. If I got 3-4 plants out of this all in all I would be quite happy.
Turns out that the ones I tried out straight off, a week later they sprouted and it looks like I will get 6 seedlings from this last third of the 50 seeds I received. If I don’t get any more at all, I would still be very happy. This is a plant I’ve never seen in my life, as far as I know, and I certainly have never tasted. I’m going for the adventure of it… even it might take a while 🙂

I hope to plant out this one behind a newly raised hugelkultur bed. This will give the Pawpaw some shade the first couple of years as they require, and also the hugelkultur raised bed will hopefully provide some valuable nutrients to the young tree.

Transplanted the first pawpaw into the ground on the 18th of May and currently, it looks like it’s doing well. I planted it partly shaded and put up a makeshift windbreak to minimize the transplant shock.

I tend to be a bit too eager when I buy seeds, as I often just check if it will survive where I live, and forget to check other vital information.

With the Pawpaws, as mentioned already, a totally new plant for me, I forgot to check how it pollinates. To make things worse I’d already transplanted quite a few of them before I learned that they need pollen from another tree that differs genetically from each other to provide fruits from successful pollination.
In addition the trees must grow close, like 3-4 meters (10 – 15 feet), as they are not pollinated by bees, but by flies and beetles.

So, I had to get some more seeds as I don’t have any information about the seeds as if they were all taken from one plant or related plants.
I figured I’d have a good chance if I just ordered seeds from a different seller from last time.

The new seller digitalgeezer provided the best information I’ve ever had from a seed seller on eBay. Not only did the note say the seeds had already been cold stratified, but it was also explained very carefully where their seeds originated from and that all their seeds were mixed from several patches of trees with a different genetical origin.

These seeds have not germinated yet, but when they do I will transplant them as quickly as I can and label them all so I know that those are different from my first batch.

Turns out that Pawpaw seeds turn out to be much robust than what I thought I ever could be.

Last growing season there were a number of Pawpaws that never sprouted.
After late fall I took some of the pots and just emptied them in a pot outside to be recycled the following year. Several months that soil lay there until I tried to rescue a quite new mango tree that had dried out and had too little soil for my liking. So I went outside and grabbed some of the soil in pot outside and tried to repot the dried up mango.

The mango tree didn’t recover, but it had now turned to real winter so I didn’t want to mess with the soil in the pot. I just left it there.
Suddenly we have 3 new Pawpaw seedlings. Seems these seeds needed an extra stratification period, so the cool and then later cold weather really did them good.

Now we know for sure that we have, if most of the Pawpaws survive this winter, which have been unusually cold for us, that we will have a good genetic variation so if all conditions are met we should get pollination between the trees in a few years.