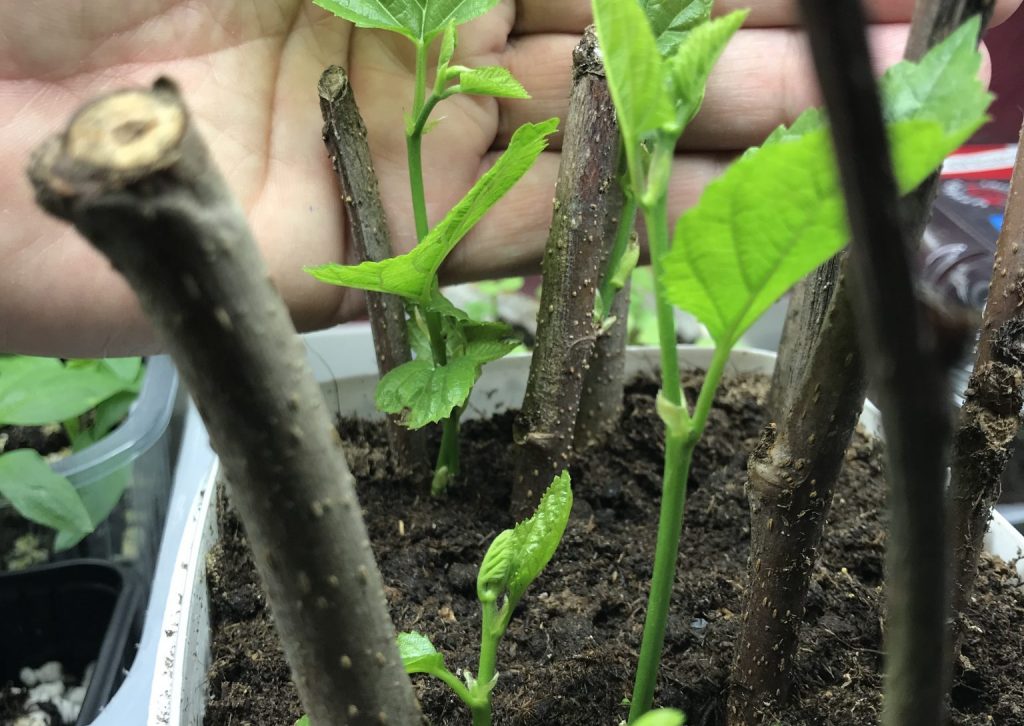 Mulberry, all variants, are not common at all where I live, Norway (southwestern part), but I wanted to see if I could get them to thrive here, it’s exciting to get things to thrive, but even more so if it’s something new.
So I did some research and decided that Black Mulberry (Morus nigra) might be a good choice.

I ordered some black mulberry cuttings from an eBay seller and they arrived well packed. I had great success when it came to germination, but I was a bit impatient and transplanted two of them too early, got a couple of nights with frost. All leaves fell off, but I’m not quite certain they died.

The reason I got these off eBay and not from a more local seller, got to support local when it’s possible, is that I couldn’t find anyone selling it.
More on how I choose where to buy things to grow in my garden in another page on my site: Where to get seeds

The two largest ones I’ve waited a bit longer to put into the ground.
The first of these last two I put in an area of our garden that can get a deal of wind so I attempted to give it a better chance of surviving the transplantation shock by making a makeshift windbreak.

This was how far they got towards the middle and end of May 2020.
I will update the progress as anything major happens.
Fruit can not form this year, from my understanding, as they don’t form on this year’s branches.

The first two I transplanted quickly lost their leaves, but I didn’t give up on them and watered them during dry periods. After a few weeks, they seemed to wake up again (beginning of June). Their leaves are not as large as they were, but they seem strong.
The last two plants I transplanted have also started to lose their leaves and it seems to have new leaves forming, so I’m not too concerned.
Weather has been quite good, warm, and unusually dry, but my heavy mulching and sporadic watering should be enough.

I planted the four plants in different locations on our property. Shade, sun, wind, good soil, bad soil, very well drained soil etc.
Having no previous experience with this plant I think that is a good idea, so the chance of having at least a couple of them surviving the first winter will be higher.