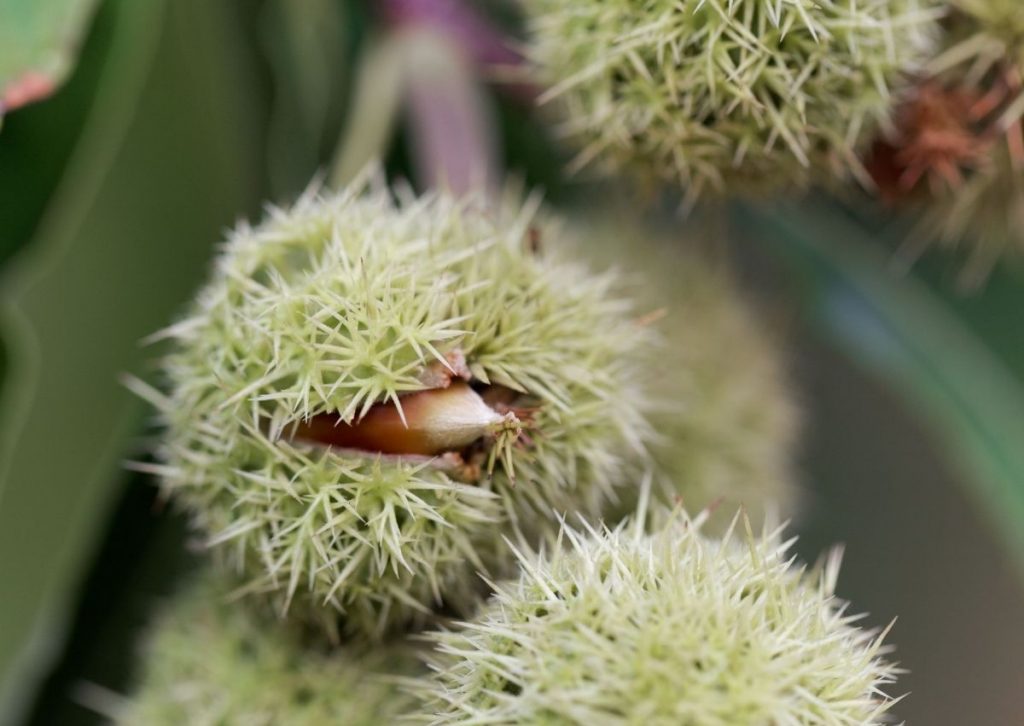 Chestnuts are not common in the wild in Norway (where I live), as it hasn’t naturalized here. I recently read about Dwarf Chestnut or American Chinquapin (Castanea pumila) and straight away thought this might be a good idea to try to get some seeds and see if I couldn’t get them to thrive in my wet Zone 7 climate (USDA).

Chinquapin is a small, nut-bearing tree or shrub that belongs to the genus Castanea. It is native to the eastern and central United States, where it grows in a variety of habitats, including forests, meadows, and along streams. Chinquapin has smooth, gray bark and dark green leaves that are oval in shape and have serrated edges. The tree produces clusters of small, yellow flowers in the spring, which are followed by small, edible nuts that are encased in spiky, green husks. The nuts are about the size of a hazelnut and have a sweet, nutty flavor. Chinquapin nuts can be eaten raw or roasted, and they are often used in cooking and baking. The tree is also used for ornamental purposes in landscaping.

Since even “normal” chestnuts are rarely, if ever, found in nurseries I searched eBay. And I found this one seller (lupinaster) that had a good rating and lived relatively close to me. They arrived 18 days after I ordered them and that’s not bad for international shipment.

For me, the size and how quickly they can produce nuts were the two main reasons why I ordered my seeds.

Any reasons why one might avoid Dwarf Chestnut (American Chinquapin) where you live?

For a lot of people having plants that spread by suckers might be a deal-breaker, so be aware of this.

The Dwarf Chestnut, American Chinquapin (Castanea pumila) seeds had already sprouted when I got them (28th October 2020), so I put them in individual pots.

Two months later, one of them broke surface, and as of beginning of February none of the other four have showed any sign of life.
From experience sometimes plants can surprise you and spring to life later on, so I will leave the remaining seedlings in their pots for a few months more. If none of the last four don’t show any sign of life after our last frost day this spring I will just put them in the ground in an area I have designated for random stuff like this.

If I’m only left with one of these dwarven chestnut trees, then I absolutely will try to find more of them. My thought being that I don’t know if this will thrive where I live so having several plants with variations of the genetic material available should be a sound idea.

February 2021, the Dwarf Chestnut is slowly, but steadily growing

Just discovered that a second Dwarf Chestnut has made it.
I also realized that my wife of more than 25 years never has asked me to express more feelings. My mood was instantly euphoric.

Transplanted my Chinquapins near an established in-ground hugelkultur bed

I probably exposed one of my Dwarf Chestnuts (Chinquapin) to a bit too much sun too quickly, but I hope it will recover now that we’ve had a few cloudy days and I’ve transplanted them underneath two plum trees. The plum trees will hopefully create a good microclimate in the next year or years. I plan to remove the plum trees as those have not been a success.

This part of our property has the worst soil. The only good thing about it is that it drains well. It is on a slope where I have a sunken hugelkultur bed in between where I transplanted the two Chinquapins that germinated from the nuts I ordered off eBay. I put one above and one below the sunken beds. I plan to raise the bed a bit later this summer (2021) to stop the wind so the microclimate will improve.

Summer of 2022 – Status of my Chinquapins

It’s now the summer of 2022 and my two Chinquapin trees, which are also known as dwarven chestnuts, have made it through their first winter and have even grown in size. One of the trees suffered some damage, appearing as if it had been stepped on and possibly broken, but it was able to recover and thrive during the summer.

Originally, I had placed the Chinquapins near an old hugelkultur bed with the intention of allowing them to receive some shade from the plum trees growing there, with the eventual plan of cutting down the plum trees once they were no longer needed for shade. However, I had previously thought that the plums produced by these trees were not tasty and were prone to insect damage, so I had considered removing them. But to my surprise, the plums produced this fall were actually quite delicious and enjoyed by all members of my family. Now, I am unsure of what to do with these plum trees.

I’ve started to create Bonsai, and I think the Dwarf Chestnut should be a good choice for its look. My other chestnuts have really large leaves so those will not be a good choice I think.
This is an idea I have, but first I’ll have to get some more experience and experiment with them. Future experiment.

Where and how I get my seeds.